"Imagine if we could speak to the earliest Americans. In a way, they are speaking to us. Through their petroglyphs and pictograms, through the remnants of their dwellings, and through the other artifacts they left behind, they are sending us a prehistoric message that gives voice to the lives they once lived. The rock art of this remote canyon in Southeast Colorado was created up to 4000 years ago. Very little is known of the prehistoric Native Americans of the area, but archaeologists suspect they were nomadic hunter-gatherers whose visits were short as they followed migrating game."

Getting the Shot: 3 O'clock in the morning brought the moon into perfect position to illuminate the canyon as well as this graphic message from the distant past. The cactus was lit by my LED headlamp passing through an orange filter for effect. The orange light on the cactus branches gives an appeanance reminiscent of flames from a primeval campfire, while the clouds above almost appear to be smoke from the fire mimicking the shape of the flames.

Compositionally, this image does not allow the eye to move smoothly through the scene. Instead, there are three distinctive, sharply divided regions - the petroglyph wall, the cactus/canyon, and the night sky - each conveying its own mood and causing visual tension. At the same time the branches of the cactus, the fingers of clouds, and the points of the animal's antlers are all reaching skyward and provide a unifying theme for the image. I chose to make the rock wall nearly half of the frame in order to place emphasis on the petroglyph and the ancient people who created it. 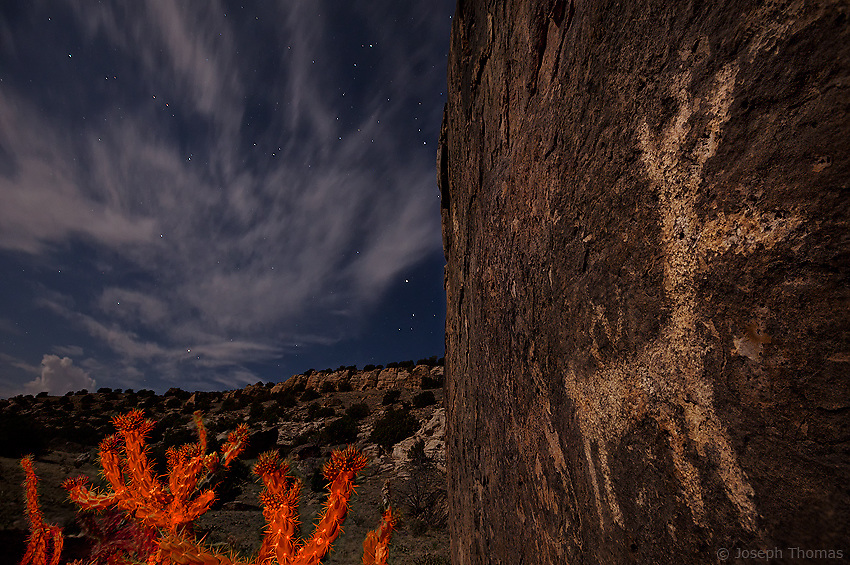